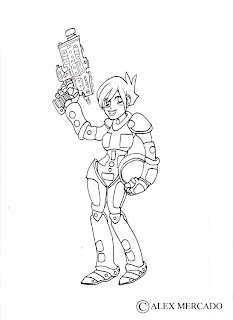 will color this later

so this is after 50 posts,
and for the life of me, I can't imagine rummaging through the
archives, and finding stuff i' put in my portfolio. I'm such
a nutjob, that I'd need to make a perfect image,
which i always hardly feel i ever do.

Now what kind of portfolio, digitiall will i create?
i would mostly assume i'd do a site with subsections,
since i like to touch many topics of art. Like the black and white nightmarish
art, and the cartoony hipster character designs? comic book stuff,
realism (don't have any of that up) My scatterbrained thinking
really throws a monkewrench into this process of creation.
but we'll see, i'll just color this baby up, and hmm colorschemes.
what do u think.

and i gotta think up some scheme to work with
Jessica Yeomans, she's scary good and she thinks i am too, so hell why not!
Posted by alexmercado at 11:55 PM 1 comment: 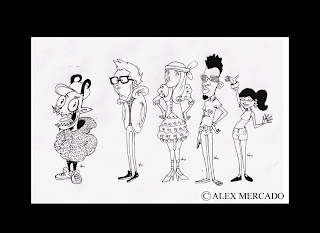 except for the devil in the BAPE clothing. (i was gonna put him in some "billionaire boys club" gear,
but meh.)

the first guy is probably inspired by an ultra douchebaggy looking guy a classmate dates.
second girl is amalgamation of girls i've met in seedy parties.
third is the gay African American guy with the kanye west and the black faux-hawk.
(he didn't start off gay, but man he looks like it)
fourth is the asian girl with the obnoxious leggings under the bicycle shorts. (yes i know a girl like
that, she was into me, UNTIL she got into that scene.)


and no i'm not attacking people from Williamsburg, i'm not as "cool" as them. shrug!!

and going back to a previous story on this blog, the hot chick from my college who completely ignored me at my job when i reminded her we took history together came back again,
and she was staring me down like i was a runaway lust monkey... wtf?
Posted by alexmercado at 9:37 PM 1 comment: 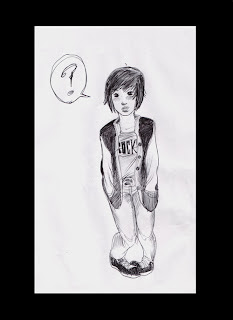 now i can break out the templates for an official site, with official work, yuck, here's a sketch of a cute, shy girl for your troubles.
Posted by alexmercado at 4:22 PM 1 comment:

i am now clueless what to do.
Posted by alexmercado at 6:06 PM 1 comment: